Structured auditory forms such as verse, oratory speech and song may be seen as forming a continuum with natural spoken utterances and written language. Spoken, recited and sung text performances can be distinguished in terms of memorability and spontaneity. Previously conducted research into “singability” as a criterion for verse translation adequacy has been extended to include the concept of “rappability”. A theoretical overview and a review of developments in English and Russian poetry over the last two centuries culminates in a concise assessment of the works of three contemporary rap artists. The isochrony hypothesis predicting that utterances will be temporally organised into segments perceived as of equal or equivalent duration is evaluated for English and Russian on the example of a project to translate a poem by Lermontov into English and perform both versions against the same composed background track. A synthetic approach to investigating isochrony in language evaluates the flow of a text performed against a constant tempo background track. A discussion is presented of the issues involved in translations which attempt to preserve the original rhythm and phrasing. The process of performing “rapped” recitals of the Russian and English texts is described. The comparison of rhythmic features of Russian and English can inform future research and the preparation of texts for various functions, helping to predict their memorisability and effectiveness in eliciting the attention of audiences or interlocutors. (PDF, 766 Kb)

‘Lovely Jubilee 2020’ read by Thomas “Riffmatch” Beavitt and interpreted by young actors from the Verkh-Isetsky Centre of Culture and Arts Theatre Workshop at the Kamerniy Teatr, Ekaterinburg, on the 26th January, 2022. Stage show directed by Evgeniy Zaev. Music by Andrey Bokovikov and Nikita Nikitin. Video montage by Ivan Usoltsev.

‘The Law of Noncontradiction’ read by Thomas “Riffmatch” Beavitt and interpreted by Anastasia Fayzulaeva at the Kamerniy Teatr, Ekaterinburg, on the 26th January, 2022. Stage show directed by Evgeniy Zaev. Music by Andrey Bokovikov and Nikita Nikitin. Video montage by Ivan Usoltsev.

Global Village Bard, in association with the Institute of International Relations in Ekaterinburg, Russia, is proud to hold the first ever competition to translate “rappable” verses from English into Russian. 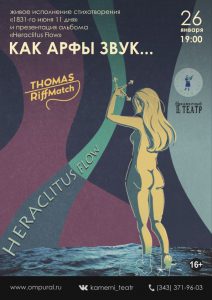 On the 26th of January 2022 at 19:00, a special event “When a harp rings out boldly…” will take place at the Kamerniy teatr in Ekaterinburg (18 Proletarskaya street).

Along with songs from the new album “Heraclitus Flow”, the concert performance will feature a recital of the poem “When a harp rings out boldly in eternal halls of fame” (Lermontov, in the original Russian) by Thomas Riffmatch (Beavitt) to original music specially composed by Nikita Nikitin and produced by Andrey Bokovikov.

Commissioned to translate Lermontov’s youthful poem for a film project, Beavitt noticed a flowing style that seemed to suggest a rap performance. Although the piece was originally performed in the English translation, accompanied by the composed backing track and a sand animation by Ekaterina Sheffer, this will be the first time that the piece will be performed in the original language. In this performance, directed by Evgeny Zaev, the soul of the 17-year-old young poet will be represented visually by the dancer Valeria Kudrina.

The second part of the concert will feature a presentation of songs in English from the album “Heraclitus Flow”. The concept underlying the album was inspired by the thought of the philosopher Heraclitus of Ephesus – “No man steps in the same river twice, for it’s not the same river and it’s not the same man.” Thus, the idea of flow informs both the performance approach and its content.

Admission by tickets and invitations. Buy a ticket

A live broadcast will also be available via the link: https://youtu.be/uqTckYZVAO8

Rapper Thomas Riffmatch’s latest single takes the form of a love song from one entangled particle to another. His advice? Keep on moving into the light, don’t fall into a black hole and store some salt on dry shelves. Everything will be ok… at least, until the inevitable wave-function collapse. Orgasms are simulations… or not!