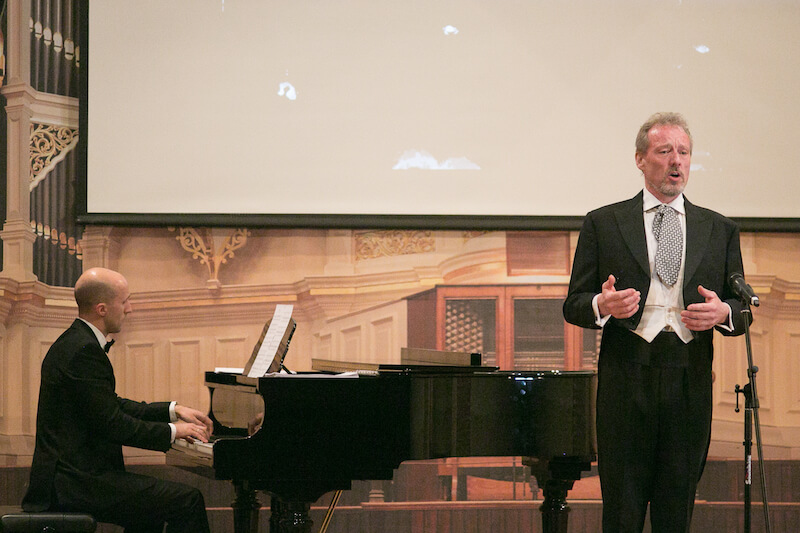 With spring finally coming to Ekaterinburg, we set out on a winter road following the tracks of Franz Schubert. Our guide is singer Thomas Beavitt, who presented his interpretation of Schubert’s song cycle at Dom Muzyki.

Franz Schubert was only 31 years old when he completed his masterpiece “Winterreise”. However, he was already terminally ill and did not live to see the premiere. Thus, the cycle became his swan song – and, at the same time, one of the most relentlessly bleak works in the history of music. “A wreath of eerie songs” is how the cycle was described by Schubert himself.

The cycle became a model of its genre and over the space of two hundred years has experienced many incarnations and interpretations. For example, the renowned American choreographer John Neumeier brought a “Winterreise” ballet to stage. In Michael Haneke’s tragic masterpiece The Piano Teacher, the cycle serves as a through-line narrative. The silver age poet, Mikhail Kuzmin, referred to Schubert’s creation in his last poem.

Now a new interpretation of “Winterreise” has been given by Scottish translator and singer Thomas Beavitt. He has performing in Ekaterinburg since 2011 and living here for the last three years. His repertoire includes English versions of Vysotsky’s hits and the songs of the Great Patriotic War. Now he has translated the lyrics of “Winterreise” into singable English; a Russian version is also in the works. Scores were entrusted to pianist Alexander Polyakov, laureate of all-Russian and international competitions. The result was a concert held in Dom Muzyki on April 19, which also happened to be Thomas Beavitt’s 50th birthday.

The pianist knocks dreary chords out of the piano, mostly in the minor key. Thomas’s voice intones melodies of morose, decadent beauty. Behind him is a projection with Russian translations of the songs and illustrations by Chisha Paszczyk. In the paintings are roads, mountain passes, lonely houses, a dull winter sun, a snow shroud. The names of the songs are correspondingly gloomy: “Frozen Inside”, “Corbie”, “A Touch of Frost”, “Mock Suns”, “Frozen Tears” and, of course, “Solitude”.

Over the course of twenty-four songs, Schubert portrays the wanderings of an undead soul in the midst of a series of harsh winter landscapes. Our lyrical hero’s peregrinations are essentially aimless. From time to time he encounters road signs, peeps into taverns, stops in a village… even goes to the post office! Sometimes flashbacks come upon him: dreams of spring, a murmuring brook, memories of a loved one. At these moments, the pianist takes a major chord; in the sad voice, there is some element of wistful dreaminess. Such moments of enlightenment are like patches of thawed ground that only emphasise the overall frozen monumentality of the work. The stream is frozen, the beloved has gone, no letters have come; and ahead of the narrator is a long road without end. Winter Journeyman is a kind of road-movie without a final destination, its hero reminiscent of the wandering protagonists in the films of Jim Jarmusch.

In the interpretation of Thomas Beavitt, the choice of language seems strange: in the original German, the songs sounded somehow more convincing. But thanks to English, one can see how Schubert anticipated the future of music: were he to live nowadays, “Winterreise” would have been released in the form of a double album of gloomy guitar rock songs or a depressive rapper mixtape. After two hundred years, musicians still gravitate towards minor keys, sad melodies and gloomy themes; it is conceivable that in 200 years time the songs of the depressive heroes of our own time – Robert Smith or Lil Peep – will be performed in Dom Muzyki. The winter road is without end.
—