The Songs of the Great Patriotic War project consists of a repertoire of popular Russian songs dating from the period 1941-1945 when the Soviet Union was engaged in a fight to the death with Nazi Germany. Although also containing patriotic themes, these songs are characterised by their tender and quintessentially humanistic view on the horror of war and all its associated emotions.

The list of those songs already written and performed by singer-translator Thomas Beavitt is as follows: 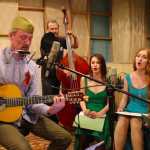