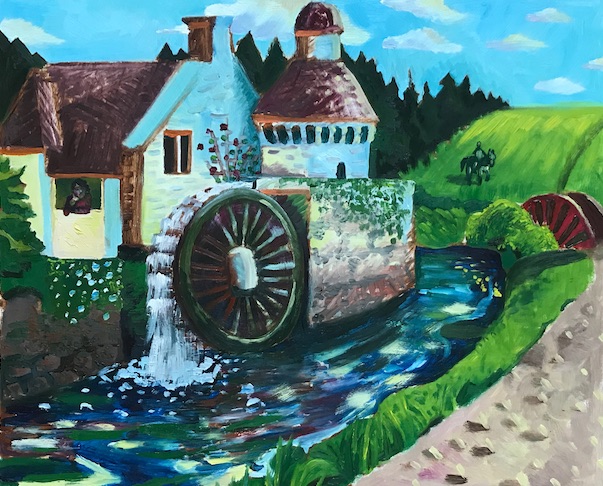 Today I am going to try to address the main problem with this website, which is that, although my lovely webmistress Olga and I have been beavering away to try to obtain a harmonious marriage of form and content, the editorial glue that should hold this whole thing together has, until now, been lacking.

So, what is Global Village Bard about and why might it be of interest to you? Essentially,  the concept is that the activity of song and verse translation produces rich, meaningful artistic collaborations, whether in the area of video or audio production, live performances, happenings and so on.

Since I am the founding Global Village Bard and I happen to be currently located in Ekaterinburg, Russia, a lot of the collaborative work is presently anchored in Russian culture. So, for example, the project of translating the Russian poet Lermontov, who had Scottish family roots, has not only generated a repertoire performed by the vocal group ‘Rhyming Thomas & the Three Muses’, but is currently the focus of a collaboration with two young composers Andrey Bokovikov and Nikita Nikitin. This work is essentially a spoken word composition, in which musical themes (leitmotivs) are combined with rhythms derived from contemporary rap as well as those present in the poetry itself. We hope that there will be not only an English but also a Russian language version of this work – the former recited by me and the latter by a special guest to be announced later. We are very much looking forward to sharing this work with you!

Another collaboration I am currently engaged in here is with the pianist Alexander Polyakov, who teaches at the Ural State Pedagogical University. Alexander is a really great musician! One of the really great things about living in this city is the opportunity to work with such talented and hard-working people! We have been working on Schubert’s song cycles – last year it was Winterreise, which we performed in my contemporary English translation. This year we will be performing Die Schöne Müllerin but sticking to the original German, at least for now!

The oil painting you see below was done by Chisha Paszczyk, who also did the series of paintings illustrating Winterreise last year. Her work caught the eye of Iain Phillips, whose encyclopaedic tribute to Winterreise features our version of the work.

So, what has this to do with you? Well, on the one hand, it is hoped that you might simply enjoy viewing, listening and reading what is presented here – or even attending an event sometime. But on the other hand, the Global Village Bard concept is based on the insight that everyone is in the process of developing themselves and potentially has something to contribute. If this form of development interests you, get in touch!